Super excited – Skippy was definitely here in the UK ready to be collected, so I headed over to Peters and May to start picking things up.

We needed a couple of trips to make sure everything is ok, properly secured and safe to trailer so initially I did two quick trips bringing back what I could in the trailer and car.

The exciting moment of the first view of Skippy here in dear old Blighty! 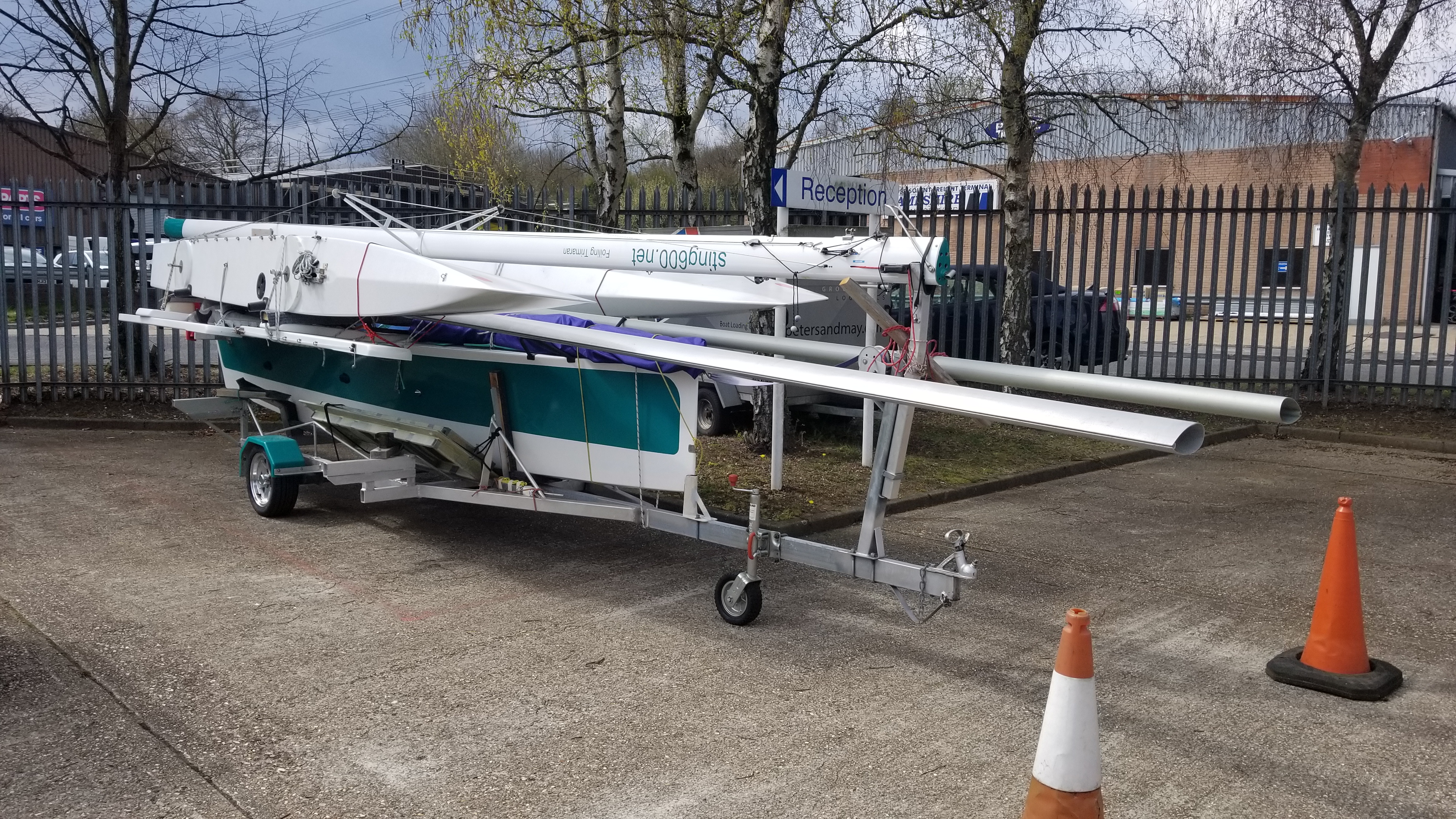 Fantastic – this is a great looking bit of kit with the boat, mast and trailer all colour coded.

There is some minor damage with the mast blanks having broken free, breaking the support and crashing down onto the supports on the bow which were designed to help catch the gennaker and keep it out of the water when being lowered.

That should be easily fixable and it looks like the starboard tiller extension support has taken a pasting and been snapped of as well. Bugger.

As we saw previously, the floats were taken off and stacked on top of the beams as it wouldn’t quite fit in the container opening. I’ll be looking at what might be possible to alter the trailering width.

The trailer was rather overloaded with the mast sand various boxes stuffed in the cockpit so I took what I could back in the car and box trailer to reduce the weight as much as possible.

Looking at the trailer it looked like the coupling was a little too high – after a quick measure I could see that even with the jockey wheel as low as possible, the hitch was still above the level of the hitch on the car! Bollocks.

I took off the moulds that were strapped in to the trailer, the sails and foils and stacked up the car and box trailer with as much as I possibly could.

So back to collect Skippy himself!

Nothing for it but to pick up and hold the tongue of the trailer and then try to release the jockey wheel without the coupling smacking into the back of the car….

I tested the weight and I knew the tongue weight was still easily 100kg+ as I currently deadlift that in the gym. However, with everything else loaded on the trailer including mast blanks and them particularly getting in the way there was no way to easily take the weight one handed to be able to unlock the jockey wheel.

The mast blanks would be hitting the roof of the car and in fact go into the rear roof rack bar.

I had brought various lengths of wood, tools, Workmate and bolts with me, so I fashioned some new supports to replace the knackered support beam and lifted them up a bit. I then loosened off the mast blanks and managed to pull them further back, helpfully also reducing the tongue weight a little bit.

It looked like it would now fit on the car and luckily I had various lifting straps with me, so I got one to the right length to put it round my shoulders, took the strain and gently dropped it onto the car without knackering the bumper thankfully!

The car suspension immediately flattened – it looked like a powerboat squatting down at the back:

All I needed to do now was get the towing board sorted and make sure everything was secured…..

I tried the board in a couple of positions: 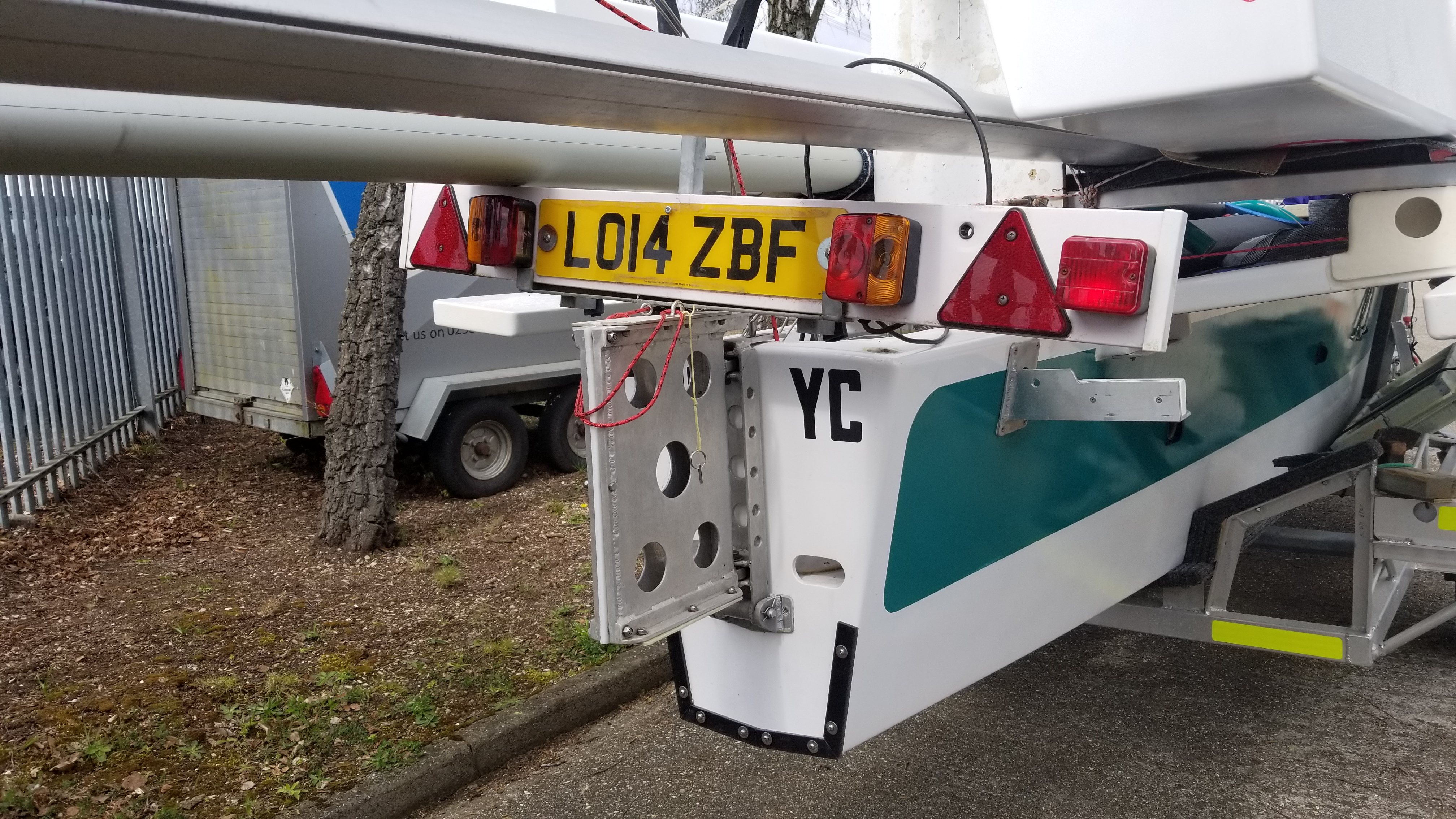 but eventually had it strapped on down low with ratchet straps and some good old duct tape!

Duct tape – the greatest thing to have  in your toolkit – it gets you out of the crap every time!

Ready to head home and we gingerly set off – the boat is 6m long unfolded, but on the trailer with the floats folded forward that takes it to 7m and then the tongue with the mast support / winch bar adds a further 60 odd centimetres so this is quite a chunk hanging off the back of the car!

We got going and pulled over just before getting on the motorway to check everything was still tight and secure. Everything looked good so we carefully drifted onto the motorway and got motoring.

The trailer is rock solid, absolutely great. It sat there no trouble and the car felt great – this is certainly a quality, well made trailer.

We were heading back home but initially we were going to put him on our neighbours (Sue and Tony) front drive as I thought the trailer would not fit into our rear drive and would need some adjustments.

We will send you details of our latest news and adventures!

or chat with us now bottom right!

We drive the trailer round to our shared rear drive entrance, drop off the newly detachable front of the trailer and drag it round to the second private entrance. We turn him around, put the tongue back on and reverse him onto the drive! Success! We can see the side...

END_OF_DOCUMENT_TOKEN_TO_BE_REPLACED

Skippy is indeed home! Albeit next door overnight! There will be European championship football in July when I rather doubt anything "will come home" unfortunately.... Anyway, Skippy is on the drive, we've moved the mast blanks round to my drive and double checking we...

END_OF_DOCUMENT_TOKEN_TO_BE_REPLACED

So, we have a 3.5hp Tohatsu 4 stroke which we will look to use for launch and retrieval. The prevailing wind is South Westerly so across the launch ramp and with no pontoon available, we will need to drop the boat in the water and then pull it off to the side of the...

END_OF_DOCUMENT_TOKEN_TO_BE_REPLACED

(Still Not) Storing the boat at Lymington Town Sailing Club

We were always going to do the initial testing down at Calshot anyway as the ramp there is much bigger but now we have a parking space confirmed there, I decide to let LTSC know that we won't be needing the space now - Pork Chop (the Spitfire) has been collected and...

END_OF_DOCUMENT_TOKEN_TO_BE_REPLACED

(Not) Storing the boat at Lymington Town Sailing Club

The intention from the start has been to store and sail the boat out of Lymington Town Sailing Club which we have been members of for some years. Since contacting them in December 2020 about swapping our Spitfire Catamaran out to use the space for Skippy, it has been...

END_OF_DOCUMENT_TOKEN_TO_BE_REPLACED

After more delays, it appears that Skippy will finally arrive in the Port of London on Monday 11th April and then hit the road to arrive at Peters and May Eastleigh location that afternoon. We're planning to collect him in a couple of trips on the 12th and 13th as...

END_OF_DOCUMENT_TOKEN_TO_BE_REPLACED

Bugger - just been updated that the Evelyn Maersk ship with the container with Skippy onboard is currently in the Port of Felixstowe BUT our container is either not on there or is just not being unloaded! WTF!?!?!?!? It is now leaving Felixstowe tomorrow morning to go...

END_OF_DOCUMENT_TOKEN_TO_BE_REPLACED

Ever Given container ship blocks the Suez Canal!

Jeepers that was lucky! The Suez Canal got blocked today by the Ever Given container ship operated by Evergreen Marine: This massive ship of the Imabari 20000 design is 400m in length with 59m beam and can hold 20,124 20 foot containers! Interestingly, this is not the...

END_OF_DOCUMENT_TOKEN_TO_BE_REPLACED

The Adventure 600 trimaran is now being shipped from Len Surtees in Brisbane and will then heading to Southampton! The Maersk Surabaya position can be tracked here: https://www.vesselfinder.com/?imo=9330068 and is calling next at Sydney arriving on the 8th Feb. It is...

END_OF_DOCUMENT_TOKEN_TO_BE_REPLACED

We're great fans of the small boat Raid races like the Everglades Challenge and the Texas 200, but there is not really much available in the UK for enthusiasts to challenge themselves and their equipment. We're interested in gauging interest in something similar based...

END_OF_DOCUMENT_TOKEN_TO_BE_REPLACED

The Mooring Hitch Video from the Animated Knots YouTube channel: https://www.animatedknots.com/mooring-hitch-knot Pass the rope behind and over whatever you are connecting to. With the tail form a loop so that the tail touches the standing end. Pass a bight of the...

END_OF_DOCUMENT_TOKEN_TO_BE_REPLACED

Create Your Own Adventures! Dismiss